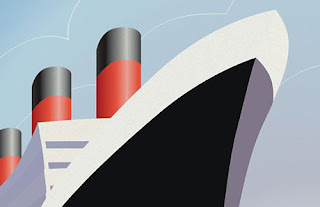 
Age becomes it. Anything Goes first appeared in 1934, but it dances right into (and over) today’s concerns (celebrity, the Stock Market, crime, churches, social status). Directed by Jim Beaudry, choreographed by Gregory Daniels with music direction by Beth Burrier, over two dozen tuneful actors (some no doubt destined for Broadway like so many BW alums) prance, dance, and generally dazzle.


It all begins with a sea voyage (as does many a good tale). In the 1930s, if you wanted to go to England, you most likely took a huge ocean liner across the Atlantic. By a series of mischances, the S. S. American sets sail with some very odd characters indeed. There’s love too. Several “boys” meet several “girls” as the show progresses and romance wins out (as it must in a 1930s musical).


The leads are double cast. I saw the “Billy Cast” that featured velvet-voiced Veronica Otim as nightclub singer Reno Sweeney. Reno gets the best songs--and Otim (a bit Eartha Kitt, a bit Dorothy Dandridge, and all Veronica) handled them like a pro: “I Get a Kick Out of You,” “You’re the Top” (a snappy duet with Charlie Ray as the hapless stowaway Billy Crocker),  “Friendship” (with the delightfully comic Marcus Martin as master criminal Moonface), and “Anything Goes” (with the whole chorus).


But dancing takes precedence in this toe-tapping musical and rhythmic feet moving across the stage with precision and grace make bring real joy. It’s a first-rate show (and I won’t even say “for a college production” because the set by scenic designer Jeff Herrmann and assistant Rose Musto has a professional vibe).


Bottom Line: Lots of beautiful dancing, most at a dizzying rate, great young voices singing classic songs--go if you can.