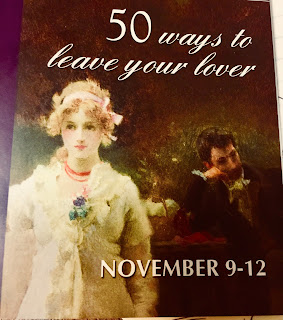 Apollo’s Fire brought a new (although this wonderful ensemble often brings something new) offering to music lovers last weekend (November 9-12). Early English love songs performed by tenor Nicholas Phan and a small ensemble showed us that love has ever been problematic. Provocatively titled “50 ways to leave your lover, or A Painted Tale,” the program featured songs from the 16th and 17th centuries. They combined to recreate feelings swirling around a young man’s love, the delicious object of said love, his terribly broken heart, and his subsequent death.


In brief introductory remarks, Phan characterized his selections as “a greatest hits breakup playlist” and thanked Apollo’s Fire founder, Jeannette Sorrell, for “letting me play in her sandbox.” And “play” he did, singing with beautiful diction, precision, and feeling over a dozen sweet, angry, and sentimental songs that survived a turbulent era of British history.


Phan, with a voice sometimes honey sweet, sometimes forceful, all contained within the grey stone walls of the church, made us believe we had somehow travelled back to England. It was a beautiful program (although I’m surely glad not to have endured living in those days).


In addition to doing a splendid job accompanying Phan, ensemble members Johanna Novom and Evan Few (violin), René Schiffer and Ann Marie Morgan (viola da gamba and cello), and William Simms and Charles Weaver (lutes, guitar, and theorbo), also played selections from William Lawes’ The Royal Consort. The stem of the theorbo stretched so long and high that one wondered if at times it might not also have been used as a defensive weapon (keeping fans at bay, perhaps?).

On Saturday night, Phan also treated the audience to a lovely encore: the Whitney-Houston-made-famous “I Will Always Love You.” Phan made a great (and deliberate) point with his encore choice: our generation did not invent love’s delights and woes. The poets and composers Phan selected celebrated it (“My thoughts are winged with hopes,” John Dowland), fretted over it (“O turn not those fine eyes away,” John Blow), and despaired of it (“Not all my torments can your pity move,” Henry Purcell).


The sedate setting with soaring ceiling contributed to the mood inspired by centuries-old songs as they were enlivened and made relatable to today by Phan’s exceptional vocal technique and the Apollo’s Fire Ensemble’s traditionally excellent playing.


It’s too late for this program, but it’s not too late to catch the Apollo’s Fire Christmas fest (yes, this is a plug). It’s a new program created by Jeannette Sorrell: “Christmas on Sugarloaf Mountain: An Irish-Appalachian Gathering.” It features Amanda Powell (soprano), Ross Hauck (tenor), the Apollo’s Singers, and the Sugarloaf Mountain players. (Not to mention, free ginger cake and cider after the concert.)