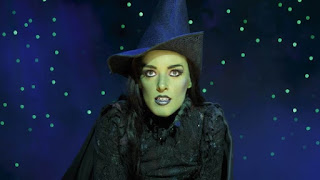 Magic still sparkles in Wicked: The Untold Story of the Witches of OZ. This brilliant production once again has returned to Playhouse Square (possibly for the fifth time), but then consider, this Tony-Award winner has been on Broadway since 2003 (and it’s still playing there). The time-tested winning concoction, created by Stephen Schwartz (music and lyrics), Winnie Holzman (book), and Joe Mantello (director) enchants, amuses, and entertains. The touring version, thanks to its all-round excellent cast, good small orchestra plus adept mechanics, offers Cleveland a dashing Broadway-quality production.

Imagine taking a favorite story, The Wizard of Oz (by L. Frank Baum), later made into a film classic, and then turning the whole familiar story inside out. That’s akin to what novelist Gregory Maguire did when he created the Wicked storyline from plot threads in Baum’s original.

Wicked shows nothing directly about Dorothy Gale, but she figures significantly in the story anyway--just around the corner and up the yellow brick road. If, by chance, you are like me and have never seen the show or read Maguire’s book then I don’t want to spoil the delightful surprises in store for you. (In the past, I had avoided the show, on principle, I suppose and indulging in “How dare they mess with the Oz series” and other foolish thoughts.)

So I can testify as one who comes to it fresh. And folks, I loved it even before the curtains parted. A giant dragon head with flashing eyes crowned the stage, making it look rather like a Viking ship and a green stage curtain centered with sparkling emeralds promised Oz delights.

Blonde and beautiful Glinda the Good comes bubbling down from the sky to begin the story. Ginna Claire Mason’s Glinda moves delightfully from airhead narcissist to one who just might be a good queen some day. Her “Popular” brings back memories of “Legally Blonde’s” Elle and everyone else who ever won prom queen back in the day.

Elphaba, her green-skinned classmate is just a bit different, but Mary Kate Morrissey makes her appealing and vulnerable. Morrissey’s vocal range is also impressive as she sustains note  high and low, especially in ”No Good Deed.” Mason and Morrissey sell the closing duet, “For Good,” like two who really believe its “feel good” message..

The whole cast (including the monkeys) clambers, dances, and scrambles entertainingly  along the way as they sketch out the full stories of the wizard, the tin man, the scarecrow, and even a bit of  the cowardly lion. Susan Hilferty’s costumes are beautiful, though the citizens of Oz look a lot like those in District One in The Hunger Games (but Wicked came first).


Bottom Line: A classy production with an excellent cast. No wonder denizens of Northern Ohio love this show and return to Oz time and time again.

Posted by Laura Kennelly at 8:05 AM