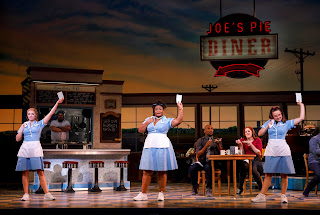 “If music food pie be the food of love, play on” [alt-Shakespeare]. That could be the motif for “Waitress,” the first 2017-2018 Playhouse Square Broadway series production. Pie features prominently in this musical directed by Tony-Award winner Diane Paulus and featuring songs by Sara Bareilles and book by Jessie Nelson. It’s based on the 2007 film “Waitress” by Adrienne Shelly.
This finely-crafted show in the Connor Palace opens the national tour of the Broadway hit that’s still playing in NYC. We may be in Cleveland, but we might as well be in New York as far as cast, sets, and performances go. “Waitress” revels in a slickly presented and sassy mix, blending song, great sets, recipes for imaginary pies, dancing, and sex into a sprightly musical event.

It doesn’t do to think too much about the soap-opera plot.

Our heroine, small-town gal Jenna (the multi-talented Desi Oakley) works as a waitress in Joe’s  Diner. She’s a kind soul and a genius pie-creator (one for every mood) who suddenly finds out she’s pregnant. Her abusive husband, Earl (played with forceful charm by Nick Bailey) and her selfish obstetrician, Dr. Pomatter (played with facile kindness by Bryan Fenkart) turn out to be equally egotistical.

But that’s all right because, despite her poor taste in men, she’s got a fabulous diner “family.” Her wonderful and funny fellow waitresses, Dawn (Lenne Klingaman) and Becky (Charity Angel Dawson), offer her love and support as they go about filling orders and coffee cups. Klingaman’s Dawn, a cute little nerd who snorts when she laughs, even finds a soulmate when she’s encouraged to be kind to the shy Ogie (an equally nerdy and awkwardly attractive Jeremy Morse). 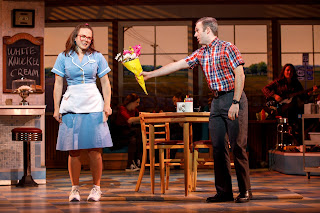 Dawson’s Becky is a warm-hearted, full-throated singer who knows what she wants (that would be diner cook Cal, played with bossy humor by Ryan G. Dunkin). Also important to the story, cafe patron Old Joe (Larry Marshall, who plays grumpy and kindly with equal aplomb).

We also meet Lulu, the result of Jenna’s unplanned pregnancy and, as it turns out, the true love that she’s been seeking all along. The delightful five-year-old Harper Schmid played Lulu opening night. Meredith Wakefield also plays Lulu.

And cheers to the multi-faceted ensemble who switch with ease from cafe patrons to hospital personnel, including Baldwin Wallace graduate Kyra Kennedy as Dr. Mrs. Pomatter,  who makes one wonder, what was the doc thinking, fooling around with a patient? (Today he’d be sued for sure).

Set designer Scott Pask creates stage magic with rolling carts that take pies on and offstage. The stage itself is beautifully framed with pies in brightly lit cases. The small onstage band accompanies songs such as “Never Ever Getting Rid of Me” (Ogie’s cute love song) and “Everything Changes” (Jenna’s true love song). If you are lucky enough to hear a CD or recording of Sara Bareilles singing the songs she wrote you will find them sweetly plaintive and often quite clever. The lyrics include various recipes for pies, mostly large globs of sugar, butter, flour, and nostalgia. (Do not sit close to the speakers, however, as they were so loud where I was that I had trouble understanding the words. Sound is a problem not unique to the Connor Palace, but I wish it could be solved.)

Bottom Line: A well-acted and beautifully staged musical treat with a feel-good ending.

PS: But back to pies: There were mini-pies sold in the lobby and during intermission and apple pie scents pumped into the lobby as well. Well, who doesn’t love pie? It set a positive vibe. But then, I still treasure an earlier even better movie pie memory (no, not the notorious film you might be thinking of). In “Michael” (1996) John Travolta plays an angel who orders every pie in a roadside diner and urges Andie MacDowell to sing "I love pie." Now that’s happiness!

Posted by Laura Kennelly at 5:58 PM