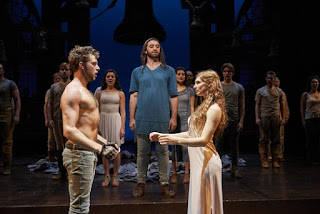 
The Hanna Great Lakes Theater’s opening show this season is The Hunchback of Notre Dame, a Disney-film-inspired musical that didn’t make it to Broadway. Director Victoria Bussert’s signature touch is shown in her vibrant use of the Hanna’s cozy space and her employment of a wonderfully talented cast. But even Bussert’s talent can’t dissipate the awkward story created by this Disneyfication of Victor Hugo’s novel. (“Disneyfication” here means simplifying a 19th-century 800-plus page gothic romance into a single story that argues for being kind to strangers and to those weaker than oneself.)


In short, there’s an outcast in the bell tower of the venerable Notre Dame Cathedral in Paris. That’s the church bell ringer Quasimodo, a deformed yet exceedingly strong man who hides above the streets lest people mock him. Below there’s another outcast, one of a tribe of gypsies, the beautiful Esmeralda. He falls in love with her because she is kind, but unlike in Beauty and the Beast, she does not fall in the same way for him. That’s all right though, they are allies against the ignorance and prejudice of the people around them.


The versatile Corey Mach, as Quasimodo, creates a believable outcast (and has the best song in the show, “Out There”). Keri René Fuller conveys the beauty and grace of Esmeralda, the gypsy girl who befriends the lonely Quasimodo. Tom Ford offers a nuanced view of the conflicted Dom Claude Frollo, the Archdeacon of Notre Dame Cathedral.


It is, however, a charismatic Alex Syiek, as the King of the Gypsies, who seems to own the story and capture attention, adding both a combination of romance and menace. The exchanges the Hunchback has with the various gargoyles and angels who inhabit the bell tower also enliven the show. They lounge or stand in place and advise him about life and love.


Scenic Designer Jeff Herrmann and lighting designer Mary Jo Dondlinger cleverly compressed a cathedral and a city onto the small stage.  Costume designer Martha Bromelmeier created an eye-catching way for the Hunchback to morph into his role as we watched. David Gotwald was sound designer and Joel Mercier led the small orchestra.


The music by Alan Menken, lyrics by Stephen Schwartz, book by Peter Parnell, are adequate and sound a lot like those in Beauty and the Beast, another cartoon turned into a stage musical. But Beauty and the Beast, with the same messages of love and tolerance, ends happily, whereas this one ends with the gruesome deaths of two who cared for each other. So what’s the point? Life is cruel? Priests are villains?


Bottom line: Such serious questions, ones that merit serious consideration by adults, are pitched here in such a superficial manner that even a young child might be mystified. This clash of elements, despite being presented by a great cast, left me feeling “meh” about it all.

Posted by Laura Kennelly at 1:48 PM