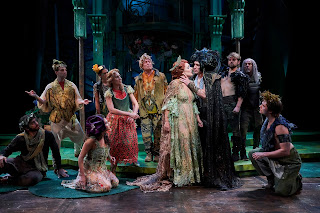 The Great Lakes Theater Midsummer Night’s Dream gives us Shakespeare at his hilarious (and bawdy) best. In this enchanting Hanna Theatre production directed by Joseph Hanreddy every silly, comic element melds and spins into a dream. Under Hanreddy’s guidance, anachronisms (but who cares?) and traditional elements blend seamlessly to create a fresh look and a marvelous show.

The identity mix-up plot centers on what happens one summer night to a combination of royals and commoners. Theseus, Duke of Athens (a regal Nick Steen) is engaged to Queen of the Amazons, Hippolyta (an equally royal Jillian Kates). Commoners Nick Bottom (an awkward yet earnest David Anthony Smith) and his friends and fellow bumblers Peter Quince (Tom Ford), Francis Flue (Mack Shirilla), Robin Starveling (Jodi Dominick), and Tom Snout (Alex Syiek) strive to create a play for the wedding. (The play itself, which we also get to see, is a comic dessert served at drama’s end.)

It seems Hermia (a pretty and flighty Michelle Pauker) has enraged her father Egeus (a blustering Aled Davies) because she’s fallen for Lysander (super-cool Corey Mach). Mach’s comic  slacker  Lysander couldn’t care less about being proper--he saunters out chewing gum--which he sticks on a beam and later retrieves--and he’s very hip (fist-bumps and all). It’s easy to see why Davies thinks him a bad match for his precious Hermia. Her father’s candidate, Demetrius (an earnest Jon Loya) also loves Hermia, but she scorns him. And then there’s Helena (Keri Rene Fuller) who has a crush on Demetrius. Fuller’s Helena shines as a prototype for all the nerdy beauties hidden behind glasses (she sports a giant pair) who also have a heart of gold.

One midsummer night, all individually venture into the forest that surrounds Athens.

Events that follow might serve as a caution about going into the forest after dark: It’s dangerous. Fairies do roam there and they are fiercer than one might imagine. They also love to tease mortals.

It seems that in the forest a less than happy Fairy King Oberon (Steen) and his Queen (Kates) have had a big spat. Oberon delegates his careless servant Puck (M. A. Taylor) to put flower juice into the eyes of first Lysander and then Demetrius. Since flower juice makes one love whomever they see first, they both fall for Helena. Oberon then plays the same prank on his wife, and she develops a passion for Bottom, who has been enchanted at Oberon’s command. Bottom now sports donkey ears, a tail, and other reputedly sexy parts of an ass. Kates and Smith make comic hay of the situation, creating genuinely funny scenes. Bottom has the time of his life.

After much romping and merriment, dawn comes, enchantment falls, and the lovers find their soulmates, there’s a wedding or two and, of course, all ends happily.

Bottom (as it were) Line: Absolutely delightful escape into Shakespeare at his funniest. It’s a magic world out there. Highly recommended.

A Midsummer Night’s Dream continues, alternating with The Hunchback of Notre Dame, through November 5 at the Hanna Theatre.