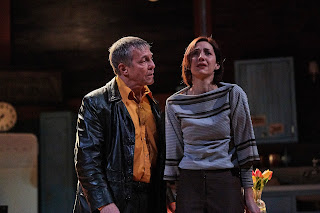 
Feeling helpless? Imagine the plight of Susy Hendrix, blind and trapped in a room with a murderous drug dealer. That’s just one plot turn in Wait Until Dark, an engaging thriller staged by Great Lakes Theater at the Hanna Theatre at Playhouse Square through March 12, 2017.


Director Joseph Hanreddy keeps the pace swift and the atmosphere menacing as newlywed-just-back- from- a-Quebec honeymoon Hendrix (a convincingly “blind,” but very trusting Jodi Dominick) slowly begins to realize that she’s not safe in her Greenwich Village basement apartment. It seems that Susy and her husband, Sam (an earnest Jonathan Dyrud) had agreed to help a strange woman they met in Canada to take a doll to a sick child in a New York City hospital. Shortly after they get home, the doll disappears. (This plot device worked in 1966, but I hope we all know by now never to agree to “help out” by taking packages across borders after hearing a good story from strangers.)


Highlights? Dominick and Hanket tumble around persuasively in the final scene, both fighting for their lives as the blind Susy becomes more desperate to find a way to take advantage of her disadvantage. A tense scene, where the audience (something I’m glad about) has a better view of what’s going on than the cast does, was created by lighting designer Rick Martin. Robert Westley skillfully choreographed their encounter. Set designer Scott Bradley convincingly fashioned all the rooms needed without scene changes. I would have liked the sound effects to have better reflected Susy’s reliance on her sense of hearing. It was hard to believe characters could come and go up the stairs to the entrance without her hearing them, though she did observe that one man’s footsteps sounded just like his father’s. Perhaps exaggerated door clicks (that door never seemed to shut right) and other sounds could have emphasized that her world was dark, but her ears were keen.


To say more would spoil the fun, but if you must know the plot, just consult wiki at Wait Until Dark. Warning: It’s a lot more fun if you don’t.