How I Learned to Drive @ The Cleveland Play House, March 4-26 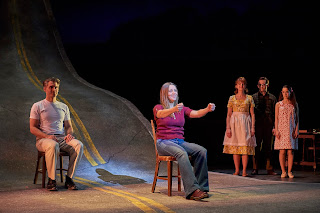 It’s a great ride through risky territory. Paula Vogel’s How I Learned to Drive looks honestly at family, sexual desire, puberty, pedophilia, and yet--magically--avoids being a mere lecture about the evils thereof. This Pulitzer Prize-winning play at the Allen Theatre, directed by Laura Kepley, runs through March 26 at the Cleveland Play House at Playhouse Square.


Under director Kepley’s sensitive guidance the five-person cast persuasively portrays people who (in their own minds) are all “doing the right thing.” The origins and consequences of their actions shown in back and forward time-jump sequence tell a nuanced and exquisitely-plotted story about what is often dismissed out-of-hand as merely a “dysfunctional” family.


As Vogel points out, it’s not quite that simple. The rural family is indeed dysfunctional, but it’s messed up in its own unique way. The story (set in the 1960s) begins with main character Li’l Bit (a very engaging Madeleine Lambert) sitting on a long winding road that, thanks to the clever set design by Collette Pollard, stretches upward to infinity (also known as the top of the stage). She begins to fill us in about how she learned to drive, thanks to instructions by her Uncle Peck (a handsome, conflicted Michael Brusasco). It becomes clear that she learned about a lot more than driving as she spends time with the only one in her family who doesn’t make fun of her body (though he appreciates her beauty and her Herbal Essence shampoo) or try to keep her trapped in her small town.


Li’l Bit’s name, like the others, holds an important meaning for the story. Her family, yearning for a girl baby, checked out her diapered self to happily discover she had only “little bits.” Her Uncle Peck’s name, of course, implies “pecker,” but that’s not explained. (We get to figure that one out for ourselves.) Other family members and friends are brilliantly (and often hilariously) sketched out by members of the Greek Chorus (Karis Danish, Nick LaMedica, and Remy Zaken).


Vogel’s play is neither a simple well-meant diatribe against sexual abuse nor a damning of adults who abuse children. It is, of course, against harming children and sexual abuse, but it also recognizes that in Li’l Bit’s case at least she’s not immune to sensing the power she has over her besotted uncle even though she’s not always sure what to do with it. Peck, a basically kindly man, is also a damaged person--his wife mentions wartime trauma when he was in the service--a factor which does not excuse his actions or compulsions, but makes him human. The interplay between the two leaves neither one unaffected, but the victory is clearly Li’l Bit’s.


Played without intermission, How I Learned to Drive gives plenty of grist for after-play conversation.


Bottom Line: Maybe someday being able to drive will be less important than it was in the 1960s, but for Vogel’s fascinating and highly recommended drama they provide a perfect metaphor for escaping boundaries.

Posted by Laura Kennelly at 2:04 PM