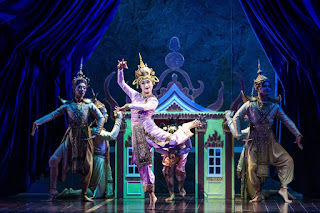 
Who doesn’t love a bit of fantasy in February? This month the KeyBank Broadway Series at Playhouse Square offers The King and I, a classic Golden Age musical currently in the Connor Palace Theatre (through Feb. 26). Directed by Bartlett Sher, this is the recently-produced and much acclaimed Lincoln Center production that won the 2015 Tony Award for Best Musical Revival.


The opening scene is breathtaking: Filmy fabric curtains part and a blood-orange sky flames out behind a ship as it slowly hoves into view, looking as if it’s about to fall off the stage if it doesn’t stop in time. (It brings back the scene in Phantom of the Opera  when we’re not sure about that chandelier plummeting across the audience). After that introduction, it was easy to settle back and wait to be reminded of all the reasons the show has been winning hearts since 1951.


Good things weren’t hard to find. The story (cobbled together from a novel based on a memoir), concerns some of widow Anna Leonowens’ experiences in the 1860s when she came to Bangkok to serve as tutor to the King of Siam’s multitude of wives (dozens) and children (even more dozens). It’s touted as “East meets West,” but Rodgers & Hammerstein’s The King and I draws its power from love stories.


There’s the unspoken love (or at least appreciation) that slowly blossoms when feisty woman (Anna, of course) meets feisty man (the King). Anna (a schoolmarmish Laura Michelle Kelly) shows her young son (Graham Montgomery) how to overcome fear with the optimistic “Whistle a Happy Tune” and muses about her loss in “Hello, Young Lovers.”


Although a lovely vocalist, Kelly seemed stuck in “teacher” mode so that a little extra frisson possible when dealing with the King (played with charm and verve by Jose Llana) didn’t really materialize. That is more likely to be true to what might have really happened than the “East meets West” vibe, but reality is overrated in a classic musical. A perfect tyrant, Llana’s King postured appropriately and sang powerfully, especially in “A Puzzlement” and, of course, with Anna in “Shall We Dance.”


Ah, but there was plenty of romance between Tuptim (the utterly lovely Manna Nichols) and Kralahome (the dashing Brian Rivera). As the only true romantic pairing in the show, they share  a wonderful duet (“We Kiss the Shadow”), but pay a high price for their love. (Young lovers often pay a high price in Rodgers and Hammerstein shows; South Pacific came out only two years earlier with the tragic story of Lt. Cable and Liat.)


The King’s first wife, Lady Thiang (Joan Almedilla), shines in the gorgeous “Something Wonderful” as she expounds on the tricky nature of love and acceptance between fallible human beings. Almedilla turned what might have been a “ho-hum” justification of polygamy into lyric emotion that, if applause is any measure, touched most of that night’s audience.


Other dancing, especially the sweeping waltzes, added froth and glamour (even when the hoop skirts were used to comic effect). Doing justice to the rich score, Gerald Steichen conducted the small orchestra that included many local musicians.


Bottom Line: I went to this critically-lauded The King and I expecting to be blown away, and there were many good moments, but overall it seemed as if it lacked heart, something missing. But, perhaps, “The Small House of Uncle Thomas” made up for it all. I think it did.


For tickets or more information go to www.playhousesquare.org

Posted by Laura Kennelly at 7:57 AM