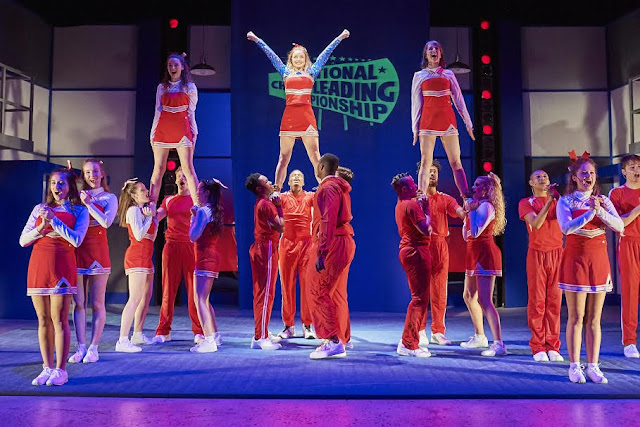 Review by Laura Kennelly
Wow, was I wrong! [That happens once in awhile, hahaha.] Bring it On the Musical, a rock/hip hop show now playing in regional premiere on the Mackey’s big stage at the Beck Center, turned out to be quite surprising.  I had assumed I’d see a fluffy  musical based on a film about high school cheerleading competitions---a great subject to showcase dance, but not one too intellectually or emotionally “deep.”
In fact,  it did showcase athletic dancers and singing cheerleaders, but it was also an unexpected exploration of “adaptation”--in both the word’s literal and figurative (or emotional) sense. With a libretto by Jeff Whitty, music by Tom Kitt and Lin-Manuel Miranda (yes, that Lin-Manuel), and lyrics by Amanda Green and Miranda, this 2011 musical (based on a motion picture) enjoyed a national tour before playing on Broadway for a limited run in 2012.
Literally, the plot turns on adaptation manifested by two girls: pretty head cheerleader Campbell (played with vulnerability and charm by Kailey Boyle) and her friend, zaftig Bridget (an earnest, very likeable Shelby Griswold). The two become even faster friends when they both have to adjust quickly to a new school thanks to sudden school redistricting policies which force them to leave their beloved cheerleading squad at good old Truman High. Their new school, Jackson High, has a funky urban vibe, but it doesn’t have a cheerleading squad. It does, however have a “crew,” run by the redoubtable Danielle (Shayla Brielle). Danielle’s dancing posse includes Nautica (sassy Joy Del Valle) and the sexually ambiguous La Cienega (a glam Nick Drake, more about this below).
The two transfer students learn to adapt, picking up new vocabularies and new attitudes. At last, after various missteps and fumbles and lies, Campbell begins to fit in. She inspires the Jackson High team to compete against her old squad, now captained--after some rather mysterious “coincidences” by the very freshman Campbell herself had added to the team, the innocent-looking little Eva (played with scary glee by Abby DeWitte).
Ah, our girl Campbell might have been more wary if she had seen the classic film, “All About Eve,” but by contest time Eva has taken up with Campbell’s old boyfriend, Steven (Jonathan Young, who beautifully satirizes the “perfect” boyfriend with silly puppy sweetheart rituals). Campbell’s former besties at Truman, Skylar (a self-centered, yet glamourous Victoria Pippo) and Kylar (a clueless but cute MacKenzie Wright) prove outstanding glimpses of why high school popularity  is a fleeting thing.
The rest of the marvelous ensemble cast, some thirty-two Baldwin Wallace students in all, offered a polished performance despite at least one substitution in a major role the night I was there. Sporting a dramatic wig, understudy Nick Drake smoothly stepped into the alt-campy role of La Cienega, one of Danielle’s crew. Drake completely sold it--making the statuesque beauty’s  remark about knowing plenty about discrimination both funny and touching.
But the show had a point beyond the vagaries of cheerleading competitions and that’s the figurative adaptation I mentioned. This transcending motif developed throughout the story as we watched Campbell and Danielle, both dominant, strong young women, learn to see past social and racial differences. This meaning is perhaps best expressed near the show’s end when Danielle sings “I Got You.” She tells Campbell, “I thought you were a spoiled rich, uptight little white bitch, now I think you're just white.” Such thoughts can sound preachy, but they seemed earned here.
On the down side: The Broadway production featured a professional cheerleading team for the stunts, an advantage this production lacked. The result? A few injuries (common to all athletic efforts, think how injury-prone high school sports can be) and as an overheard commentator remarked “You get a different show every night.” However, none of that was evident to the audience that watched this cheer-worthy show pulled off with heart and guts.
Helping to “Bring It On” were Director Will Brandstetter, Music Director Peter Van Reesema,  Associate Music Director Alyssa Kay Thompson, Choreographer Martín Céspedes, and Cheer Choreographer Mary Sheridan.
Bottom Line: Delicious fun for those of us who used to be cheerleaders and for those of us who never led a cheer in our lives.
For tickets, call (216) 521-2540 or go online at

www.beckcenter.org. The Beck Center is at 17801 Detroit Avenue in Lakewood. The show closes February 26, 2017
Photo by Roger Mastroianni
Posted by Laura Kennelly at 6:12 PM