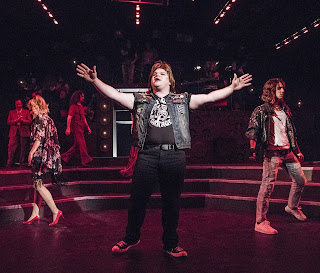 Photo/Steve Wagner
Douglas F. Bailey as Lonnie reminds the characters that this is a play, after all!

If your teen soundtrack included 1980s rock and you loved concerts with blasting music and bright lights, then you’ll feel awesome at Rock of Ages in the Alma Theatre.  Director Joanna May Hunkins and a lively ensemble cast pay homage to the good old days. Those who have been missing hearing “Anyway You Want It,” “Can’t Fight this Feeling,” “I Hate Myself for Loving You,” or any of the over thirty tunes on the song list can sit back and cruise down memory lane.

We learn most of the paper-thin storyline from Lonny (Douglas F. Bailey). Bailey, energetic and comic,  serves as both narrator and character. He steered us along musical byways via well-delivered (i.e. I could understand every word) remarks both funny and serious.

The action turns on whether or not LA Sunset Strip bar owner Dennis Dupree (gravel-voiced and kindly Philip Michael Carroll) can be forced to close his bar. Pushing to clean up the area  are developer Hertz Klinemann (a distinguished Kevin Kelly) and his son Franz (a shamelessly comic David Turner, who camps it up and has one of the funniest lines in the story--which I won’t share because revealing it would spoil the fun).

Yes, there’s also a love story. Drew, a feckless lad who yearns to make it big as a performer (played by a likeable Shane Lonergan) and Sherrie (played by powerhouse vocalist Lauren Berry) find, lose, find, etc. each other over the course of the musical.

Others in the story include Neely Gevaart (as city planner Regina, who makes a comic joke of her name), Connor Bogar O’Brien (as Stacee Jax, sexy rock star and rat with women), Trinidad Snider (as Justice, likeable owner of a “gentleman’s club”), and Jack Keith (the bumbling Mayor).

For the “big numbers” (and there were plenty of them) ensemble members Natalie Girard, Alec Chock Irion, Brooke Turner, and Meredith Zahn danced and sang as did band singers Tony Heffner and Grace Hunt. A small band, conducted by Jordan Cooper played from an upper level behind the main stage.

Bottom Line: This show might not be the best choice for the intimate environs of the Alma Theatre. Bright lights in the eyes, plus blaring sound, distracted from some very good instrumental and vocal efforts. On a larger stage all that energy would have worked better. But if the 1980s and 1990s are part of your scene, then rock on! All is awesome and bodacious! Oh, and if the ticket office asks if you want to “Sit up close,” be sure you know what that means. Opening night we had some very good sports sitting, basically, onstage. Props to them! 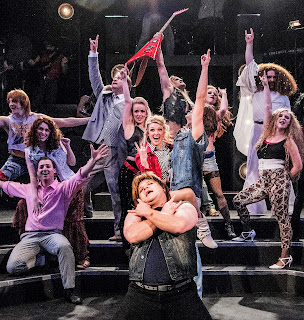 ROA_finale:
Lonny the Narrator (center, Douglas F. Bailey II) ties up all the loose ends in Cain Park’s regional premiere of ROCK OF AGES directed by Joanna May Hunkins that runs through June 25 in the Alma Theater. Showtimes are Thursdays-Saturdays at 7pm, Sundays at 2pm. Cain Park 216-371-3000. Photo/Steve Wagner

Posted by Laura Kennelly at 7:54 AM