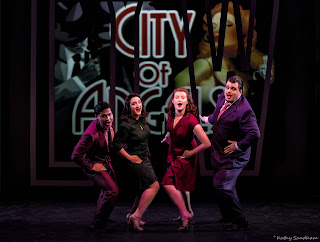 The Beck Center’s ambitious summer musical, City of Angels, wins a few, loses a few. Directed by Scott Spence, this clever and comic Tony Award-winning musical (1990) celebrates, literally, two storylines at a time and, much of the time, this works.

What works best? The music, thanks to a talented cast and an offstage orchestra directed by Larry Goodpaster, the score by Cy Coleman with lyrics by David Zippel, comes across loud (but not too loud) and clear. When Mallory, a gorgeous curvey blonde played by Madeline Krucek, sings the sultry “Lost and Found,” we see why guys might like to find her. Songs reminiscent of the era include “What You Don’t Know About Women” (amusingly presented by Leslie Andrews as Gabby and Brittni Shambaugh Addison as Oolie), and “You Can Always Count on Me” (with Addison this time playing two parts one against the other as Donna and Oolie).

Since City of Angels is a musical tribute to film noir, a genre which was the rage in the 1940s (think Bogie and Bacall or Sidney Greenstreet — Maltese Falcon, etc.). If those names mean nothing to you then you are likely going to have a harder time following the storyline created by Larry Gelbart than if you remember the old -chool “hard-boiled” fedora-wearing detective who is always getting beaten up, but somehow survives.

So what works less well? The storyline can get confusing because it’s a double plot concerning “reality” and “reel-ality” at the same time on the same set. We see script writer Stine (a comically sympathetic Jamie Koeth) at his typewriter (that should be of interest to those who have never seen one!) as he tries to transfer his story to the screen. As he does so, the story itself plays out on the opposite side of the stage, showing Stone, the detective he’s writing about (good tough-guy portrayal by Rob Albrecht) acting out Stine’s story.

There’s a voice-over (Albrecht) that guides some of the action as the detective “tells” his story, but as Spence says in the “Director’s Note,” following the story offers “challenges” since many of the parts are double-cast and if characters veer off their section of the stage then it’s hard to tell who they are supposed to be.

One minor (and funny) difficulty the actors had, which warms my ex-smoker’s heart, was in convincingly smoking cigarettes — a staple in film noir. But it’s just as well that flirting with a cigarette (whether waving or lighting) is becoming a lost art.

The striking Mackey Theatre set, designed by Jordan Janota, makes use of three panels that spell out “Hollywood” in huge letters. As the scenes shift, projected photos shift as well, instantly changing the background.

Bottom Line: Of the lines heard clearly, many were funny, the play is witty, the “rewrites” are cute, and I’d have enjoyed catching even more of the patter tossed helter-skelter across the stage. Understanding what’s going on and who is who is not really necessary — just relax and let it wash over you — you’ll be fine just basking in the music.