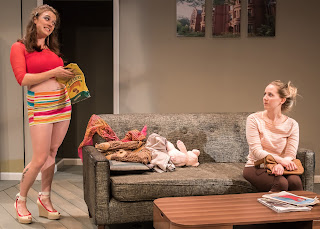 Olivia Scicolone and Molly Israel, photo by Andy Dudik
Getting drunk, casual sex, self-interest, lying, manipulation all play a part in Paul Downs Colaizzo’s Really, Really, the latest Beck Center Studio Theater offering. The play, which premiered at the Signature Theatre in Arlington, Virginia in 2012, is directed by Donald Carrier.  It’s pretty much a “He said/She said” story where the truth may not ever be fully figured out. Both major witnesses, in other words, the couple who may or may not have had sex, sex which may or may not have been consensual, have reasons to lie.

Davis, (the He, played by Daniel Scott  Telford) and Leigh (the She, played  by Molly Israel) were so drunk (or so they claim) neither is truly sure what happened the night of the riotous party in question. Other people at the party can’t be sure either since they were also drunk and were not in Davis’ bedroom with the two. That doesn’t stop them from forming opinions based on their own self-interest.

It’s only in the second act, when Leigh’s boisterous sister Hayley (a delightfully over-the-top Olivia Scicolone) swirls into the story like a trailer-park tornado, that hidden aspects of Leigh’s character appear. Hayleys’ appearance instantly perks up the action and one has to wonder if Leigh’s goal of getting a college education, a rich husband, and all that is really worth the price she is prepared to pay. Hayley seems to be living a more honest, full, and generous life.

Bottom Line: We may never know what happened, but it’s sure fun to discuss later. While it’s set in college, it would be a mistake to see it as an indictment of “today’s generation.” It could happen anywhere hormones and alcohol, ambition and selfishness overwhelm common sense and kindness.