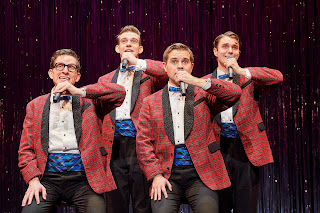 
Great Lakes Theater signs off the current season with Forever Plaid, a Stuart Ross and James Raitt musical directed by Victoria Bussert. It’s a sweetly nostalgic look at 1950s pop music and early 60s quartets (Four Freshman, etc.) through the eyes of The Plaids, four young men who were on their way (maybe) to fame and fortune in 1963. Alas, they died when their car collided with a bus full of Catholic school girls (on their way to the Ed Sullivan Show to see that new group, The Beatles, ).


But wait! Here they are, each bearing a lit candle down the stairs as they enter the Hanna Theatre with a stage waiting in readiness for them (each mic covered with a tiny white shroud), an audience looking at them, expecting a show. Is it heaven or hell or purgatory or merely a waiting station before the next stage?


Doesn’t matter. It’s meant to be a funny premise and it is, as the lads don’t seem fraught with grief over their ironic end (although they are more than a little bit annoyed).  All the quartet wants to do is perform the concert they were enroute to present. And that’s a great excuse for a show!


And perform they do, much to our delight. Francis  (Mack Shirilla), Sparky (Andrew Kotzen), Jim (Mickey Patrick Ryan), and Smudge (James Penca) croon and belt over two dozen hits that rocked every car radio and school dance back in the day. Shirilla (as Francis) strongly serves a pivotal role as the one who consistently urges his friends to seize the moment. Penca’s comic Smudge overcomes his initial reluctance to even walk onstage and by the end belts out (in his uniquely deep bass voice) that paen to heavy labor, “Sixteen Tons.” Kotzen and Ryan add light, romantic, and even comic touches in turn. Just for laughs (and nostalgia) one sequence involves recreating the Ed Sullivan Show in approximately three minutes. (Imagine “America’s Got Talent” in three minutes and you got it.)


Featured golden oldies include, “Cry,” “Lady of Spain,” “Three Coins in a Fountain,” “Love is a Many Splendored Thing,” “Heart and Soul” (with Shirilla on piano and a little help from an audience member who raised her hand when asked “Who knows this?”), “Dream Along with Me,” and...oh just think of a hit song from that era and it’s likely in the show.


The numbers are delightfully choreographed by Gregory Daniels (especially one where plungers  become mic stands). Matthew Webb (conductor/piano) and Timothy Powell (bass) provide accompaniment from one corner of the stage.


Bottom Line: In the end we never know exactly what happened to the lads after their show, but we do know we just shared a relaxing look back at another musical time. Recommended for light summer fare and a pleasant evening out.