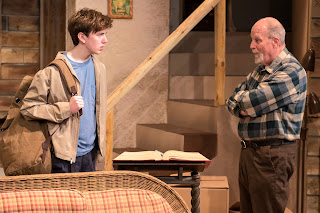 Can two weeks at a mountain cabin and an understanding adult “turn” a gay teen straight? That’s not the only question the ambitious A Great Wilderness poses at this latest Beck Center’s production. Author Samuel D. Hunter has provided director Scott Spence and the six-member cast a play that toys with the “what ifs” of life, but provides no pat answers.


All action takes place in the cozy cabin great room created by scenic designer Aaron Benson (with a hand from carpenters Gabriel Jimenez and Ryan Gajdos). There’s a wooden table and chair set, a comfy sofa covered in warm plaids, several round braided rugs, a kitchen, and a window with a terrific view of evergreens outside. There are even timbered ceiling beams.


It’s a retreat center created to convert Christian gay teens to the hetero-normative model for sexual expression espoused by their (or their parents’) religious beliefs. Mom and Dad pay to send the boys away for two weeks. They believe being gay can be cured by therapy. Walt’s “cure with kindness” retreat was set up some thirty years ago by Walt, Abby, and Tim. When the play opens, Walt (Tim Tavcar, the model of a friendly, avuncular fellow) is the only one left still working there. He’s busy packing up in anticipation of his retirement.


When a young boy appears at the door, we learn that Walt has accepted one last client: Daniel (Christian John Thomas, a talented fifteen-year-old actor who very persuasively reveals his character’s awkwardness and discomfort). Daniel’s there under protest, as he soon makes clear, but he’s a polite young man and Walt is able to convince him his stay won’t be a harsh “brainwashing.” Relieved, Daniel goes outside to take a short hike. Hours later, he still has not returned and it’s assumed that he’s lost in the Idaho wilderness.


Although the pace is slow and the action predictable in the first act (setting up how nice both Walt and Daniel are), the second act immediately time-jumps and leads us to doubt our previous assumptions. It’s a clever technique and brings in an element of mystery and, perhaps, crime. Abby (Lenne Snively as the bossy ex-wife of Walt) and her current husband, Tim (a helpful Brian Byers), Eunice (Heidi Harris plays Christopher’s semi-hysterical mother), and Janet (Kelly Strand, the business-like Park Ranger) join Walt in the cabin while everyone worries about what happened to Daniel.


Alternate pairs of conversations gradually reveal an array of personal traumas and insecurities. Questions include: Why didn’t Walt retire before now (he seems semi-incompetent, mostly because he keeps forgetting things). Why is it called a “Christian” camp? Why do the characters feel passionately that gay teens should conform to the traditional social models espoused by some churches? Did Walt’s love of young boys make Abby feel neglected in their marriage? Has Walt compensated for and subsumed his own homosexual desires so that he can stay Christian and still remain engaged with young gays as a friend? (Maybe.)


Bottom Line:  A Great Wilderness holds a mirror up to difficulties encountered when society tries to contain and regulate sexual attraction. In this play, the real wilderness seems lodged in the heart, mind, and motivation of Walt. Like the speaker in the famous poem that follows, he’s a man who has enjoyed his own version of Paradise:
A Book of Verses underneath the Bough,
A Jug of Wine, a Loaf of Bread—and Thou
Beside me singing in the Wilderness—
Oh, Wilderness were Paradise enow.
[Rubaiyat of Omar Khayyám, Edward FitzGerald translation from the Persian]


The Great Wilderness continues through April 9, 2017 at the Beck Center in Lakewood.

Posted by Laura Kennelly at 6:28 PM