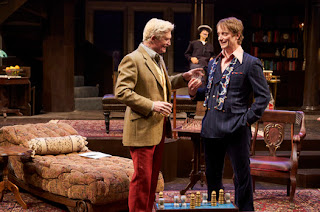 There’s mystery afoot in the engaging Great Lakes Theatre production of Sleuth at the Hanna Theatre. Director Charles Fee and the talented cast create a tour de force of acting chops. These players show what acting is all about as they create a maddening, confusing world, and then, having done so, plunge us all into its surprising adventures.

Originally presented as a (Tony-award winning) play, Sleuth, by Anthony Shaffer, has been around since 1970 and has had three movie versions. All this seems proof that the story is pretty darn intriguing. (I don’t know how I missed seeing it, but I did.)

The outstanding principal characters include mystery writer Andrew Wyke (David Anthony Smith) and his wife’s lover, Milo Tindle (Jeffrey C. Hawkins). The action begins when Wyke invites Tindle over for a visit to his country house. All seems friendly and urbane and, over copious drinks, the two decide to play a game. As Wyke, the beguiling Smith displays psychopathic gamesmanship at its best. Hawkins plays the fatuous nincompoop Tindle with art and grace. Somehow, and surprisingly, in the hands of Hawkins and Smith, both characters are likeable (and confusing).