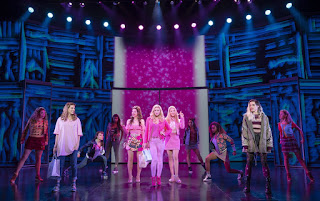 Mean Girls combines song and dance to tell a semi-comic story about teens finding their “place” in high school. Based on the 2004 film (also Mean Girls), it features a book by Tina Fey, music by Jeff Richmond; and lyrics by Nell Benjamin. It’s directed and choreographed by Casey Nicholaw

This is the show’s first national tour since its 2018 on Broadway opening. (It is still running).

Adjusting to high school is rarely easy, even for those who are introduced gradually from first grade on into the public-school system. For our main character, Cady Heron (a likeable Danielle Wade), it’s especially hard since she was home-schooled in Kenya. For some reason, her parents decided going to high school in Chicago would be good for her, so they moved to the United States. (It’s not a persuasive plot device, but who am I to question Tina Fey? It works, kinda.)

This awkward setup gives Mean Girls an excuse to draw comic parallels between the natural world of Africa that Cady knows well and the savage natural world of the Chicago high school that she knows nothing about.

Cady’s “kindly native guides” Janis Sarkisian (Mary Kate Morrissey) and Damian Hubbard (Eric Huffman), both social outcasts, provide her with the lay of the land. They point out various groups, jocks, nerds, and so on. Cady soon wins the approval of the ruling females, dubbed “The Plastics.”

The trio is led by Regina George (Mariah Rose Faith), who smiles a lot, but judges everyone; Gretchen Wieners (Megan Masako Haley), Regina's top follower, and Karen Smith (Jonalyn Saxer). Saxer’s Karen is delightfully dumb and has some of the best lines. When told Cady is from Africa, she asks, “If you’re from Africa, why are you white?!” (Karen’s the girl who says what everybody might be thinking, but no one says.)

It’s not Carrie or Heathers (no one ends up dead, although someone does get hit by a bus), but it is definitely one of those “high school is hell for girls” musicals that teaches a lesson about how to treat others (which is, “as you would like to be treated,” of course).

On the good side, the large cast skillfully executes the dance routines.

One of the most striking elements in Mean Girls was not the music (routine pop, nothing special), but the video design by Finn Ross and Adam Young. Projections on the set behind the actors made the show fresh, reminding us where we were (Africa, the high school, their homes, and so on), and letting us “see” the cruel comments written over students’ pictures that cause big trouble.

Bottom Line: There are funny moments, the cast is good, but the story has, overall, been done over and over. Yes, we know growing up is hard, but get over it. (I feel like a mean girl now, but there’s something about this show that brings out the snark.)
Posted by Laura Kennelly at 6:40 AM