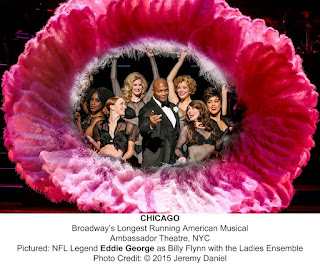 Chicago, now briefly (only six shows) at Playhouse Square’s Connor Palace Theatre, claims to be the longest running musical ever (and yes, it’s still on Broadway). It won six 1997 Tony Awards. Why? Besides the obvious appeal of women in jail (ask the producers of Orange is the New Black about that), it brings together some of Broadway’s greatest hits (such as “All That Jazz” and “Cell Block Tango”) and a distinct and generous serving of Bob Fosse-style dancing.

Set in the 1920s, the book by Fred Ebb and Bob Fosse furnishes a brief, wry glance at the criminal and grasping and murderous minds of Velma Kelly (Terra C. MacLeod) and Roxie Hart (Dylis Croman). Both Kelly and Hart killed their partners after passion went wrong (“He Had It Coming”). MacLeod and Croman have previously played their parts on Broadway and while they handled challenging dance moves with aplomb, they sometimes failed to convey any impression that they were engaged in their roles.

On the other hand Eddie George succeeded in acting the part of Billy Flynn, their lawyer. The NFL veteran and Heisman Trophy winner gave Flynn the requisite flair and charisma that flim-flam lawyer Flynn required to convince juries that his clientele deserved to be set free.

As Matron “Mama” Morton, Jennifer Fouché, brought humor and great vocal chops to “When You’re Good to Mama.” And as press reporter Mary Sunshine, D. Ratell nearly stole the show with over-the-top interactions. Paul Vogt as Amos Hart turned “Mister Cellophane” into a touching anthem for those who feel overlooked.

The practical and minimal sets, designed by John Lee Beatty placed the small orchestra onstage on risers behind the actors. The set allowed for lively comic interactions with conductor Brian Whitted.

But tastes (mine anyway) have changed and the thin story crafted by Fred Ebb and Bob Fosse served merely to string song and dance acts together. A more accurate title would be (IMHO) Chicago: A Musical Revue, since it’s very much like a dance recital and all the moves feature the same vibe (albeit a sexy-strip club one thanks to clingy black costumes by William Ivey Long).

The lighting design (by Ken Billington) used spotlights to excess, allowing dark shadows on most of the stage all the time. It reminded me of restaurants that feature mood lighting so (I suspect) they don’t need to clean the corners or the floors all that well.

Bottom Line: If you are already a big fan of Chicago then you might enjoy seeing an old friend one more time. If you don’t make this production, check out the excellent 2002 film [https://www.imdb.com/title/tt0299658/] with Renée Zellweger, Catherine Zeta-Jones, and Richard Gere. Just remember, this is not a lavish production and so don’t go expecting to get one. (This last remark is in memory of an irate customer at intermission who was telling a hapless Red Coat something to the effect that “It’s not worth the $80 I paid.”)

Posted by Laura Kennelly at 7:37 AM