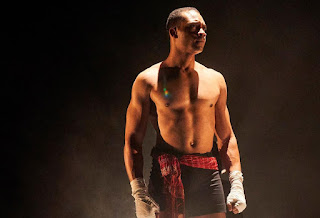 Boxing and boxers rule in Marco Ramirez’s The Royale now playing at the Cleveland Play House’s Outcalt Theatre at Playhouse Square through May 27th. Directed by Robert Barry Fleming, the award-winning drama--two Obies, a Drama Desk, and an Outer Critics Circle Award--centers on the battle in the early 1900s to integrate the World Heavyweight Championship, in other words, to allow an African-American to fight the white champ.

As theater lights dimmed, atmospheric fog crept out from under the boxing ring placed in the middle of the in-the-round seating. The spare and effective scenic design by Jason Ardizonne-West evoked George Bellow’s 1909 painting, “Stag at Sharkey’s.” (See it in the Cleveland Museum of Art.)

In the small Outcalt space, boxing became a ballet--and thankfully, a bloodless one--with a carefully executed choreography, steps highlighted by feints, punches, and recoils. Blows and shouts represented by finger snaps and foot stomps furnished a major metaphor for life experienced both inside and outside the ring.

The Royale brought out the audacity of boxer Jay “the Sport” Jackson, who aspired to be named World Heavyweight Champion, not just Negro Heavyweight Champion (a title he already held). While inspired by the true story of boxer Jack Johnson in his battle against segregated boxing titles and his successful bid to become World Champion in the early 1900s, the story also spoke to today’s struggles. (True history side note:  take a look via YouTube at the techniques Johnson used to dominate the sport . . . fascinating.)

The outstanding cast of five, some in multiple roles, fought, negotiated, defied, taunted each other, all the while redefining their place in the world. As Jay Jackson, Preston Butler III (all muscles and six-pack abs) looked and acted every bit the confident champion. Nikkole Salter, as his sister Nina, evoked the thoughtful presence of women who always try to hold things together. Brian D. Coats, as Jackson’s trainer Wynton, offered wry and earnest advice to the boxer. Johnny Ramery, as young Fish, brought bounce to his role as Jackson’s opponent and then sparring partner. Leo Marks primarily played Max, the boxer’s manager, but also effectively, sometimes amusingly, also played all the white guys necessary to the plot.

The final scene of this short play was unexpected, a dramatic surprise, and one that brought a telling finale. It was not a kumbaya ending by any means. The only negative observation may also be a positive one: the play was too short, too much a sketch. There was much more (some suggested by a gorgeous fur coat the boxer wore for one entrance) to be explored about these characters and their interactions.

Bottom Line: Often we see dramas where an individual pays a high price for being an agent of change, as Martin Luther King did in CPH’s Katori Hall’s The Mountaintop in 2016. In Ramirez’s poetic work, the price of one individual’s proving his superiority is paid by nameless others who are punished in his stead. As the boxer’s sister warns: "Look at the dogs you're about to unleash. And when it happens, don't say I didn't warn you." I’d like to see a  fuller drama centered on (as in Macbeth, for example) the price of ambition--even if, as in this case, it’s just a small part of a much larger social movement.