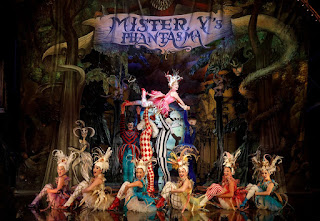 The show calls on the varied talents of a large creative team: lyrics by Glenn Slater and Charles Hart; book by Webber, Ben Elton, Glenn Slater, and Frederick Forsyth, and orchestration by Webber and David Cullen. Although it opened in London’s West End in 2010, Love still hasn’t made it to Broadway.

But never mind. It’s got Broadway-style flash and dazzle. Despite a few dubious plot twists (but what fan of Phantom cares about that?) the capable cast blazes through the romantic, telenovela drama. If you’ve not seen The Phantom of the Opera then please see it first: all will then become clear when you see Love Never Dies.

One might quibble over whether it’s “love” or “obsession” that never dies, but hey--it’s an old-school, romantic musical. Some songs, such as “The Beauty Underneath” and “Once Upon Another Time” offer pleasant memories of the original show.

Back to the plot. It’s been ten years since the Phantom disappeared. Now a world-famous opera singer, Christine Daaé (rich-voiced Meghan Picerno) has married her Raoul (a mercurial Sean Thompson) and they have a ten-year-old son, Gustave. (Gustave's part is double cast and the night I went it was handled with stunning clarity and impressive vocal range by Jake Heston Miller.)

The family arrives in New York after she’s invited to perform at Phantasma at Coney Island for a huge sum at the invitation of a well-known impresario. And that’s where the spooky left me. Coney Island? Place of fun, swims, hot dogs, and muscle builders? Just sounds like fun, not menace (though I know anywhere can be).

Gardar Thor Cortes, as The Phantom (yes, of course he shows up), seems so suave and kind (and he has such a beautiful tenor/baritone voice) that one wonders why Christine didn’t get over the mask phobia faster. He’s still manipulative, so we can’t give him a pass.

The Coney Island setting is a great excuse though for the second most entertaining performer in the show (the first being Miller’s Gustave). To call stuntwoman Katrina Kemp (who plays Fleck) diminutive and cute misses the point: she’s that, but she’s also an athletic dynamo with excellent timing (she debuted in showbiz playing Chucky the Killer Doll at Universal Studios).

Kemp and trio partners Richard Koons (as the chubby Squelch) and Stephen Petrovich (as the tall Gangle) do their best to turn Coney Island into a place of fun mixed with mystery. I’m not sure how they fit into the story, but I really don’t care. It’s a pleasure to see their teamwork.

Marvelous set and costume design by Gabriela Tylesova (including a stage-filling gown that makes Christine look like a peacock), a fine orchestral score ably directed by Dale Rieling, and eye-catching choreography performed by the nimble ensemble cast, all contribute mightily.

Bottom Line: It’s a fine night of entertainment if you already know and love the original show. Webber proves, however, that it’s hard to compete with yourself. It’s no Phantom of the Opera.

Side Note: Kudos to the RedCoat volunteers who calmly and competently ushered us out before the second act because smoke and fog used in the show had alarmed the Playhouse Square fire alarms. After about five minutes, they brought us back into the theatre. All clear. Thanks!