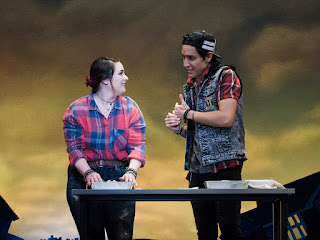 Never mind “being in someone else’s shoes.” How about exchanging bodies? That’s the premise of Freaky Friday, the Cleveland Play House’s last show of the 2016-2017 season. This Disney pop/rock theatrical production takes a light look at the common “You just don’t understand” wail that often comes from both mothers and daughters.  After  Disney movies plus TV shows based on the idea (and in this musical’s case, specifically on Mary Rodger’s novel, Freaky Friday), the comic story itself won’t surprise.
Magic happens and a mother and daughter suddenly find themselves inhabiting each other's body. They only have one day to switch back because the mother is getting married the next day (‘nuff said there).
Thanks to clever and very talented leads, Heidi Blickenstaff (as Katherine, the super-busy mom who uses her own wedding partly as a marketing ploy) and Emma Hunton as Ellie (Katherine’s rebellious teen daughter), the opening night show brought laughs plus a few sighs, looks, and  nudges amongst the mother-daughter pairs who filled the Allen Theatre.
Among the highlights in this frothy comedy: Biology class. There, Chris Ramirez as Adam, (Ellie’s secret crush) brings back memories of how easy it was to fall for “hot” guys back in high school. Hunton’s expressions as she sings “Oh Biology” (in Biology Class of course) with Ramirez are priceless. Suddenly, she (now with her mother’s mind) remembers “Oh yes, that’s what it’s like to host all those new hormones.” And, since she has her mother’s knife skills, she wows her biology teacher and class with her efficient dissection technique.
Of course (it’s Disney), after almost two dozen musical numbers (likely nothing that will make the top charts, but pleasant enough) and a bit of easy dancing poses, the story ends happily. Both mother and daughter gain new respect for each other’s lives after living them for a day.
The small orchestra, led by Andrew Graham, provided upbeat music as they played on stage behind a screen.
Bottom Line: Empathy gained via magic, quick funny, and efficient. Blickenstaff and Hunton win highest marks for excellent character switching--adding comedy and a bit of pathos to an otherwise familiar joke.

Freaky Friday, directed by Christopher Ashley, with a new book by Bridget Carpenter and a pop‐rock score by Tom Kitt and Brian Yorkey, plus choreography by Sergio Trujillo plays at the Allen Theatre through May 20, 2017
Photo: