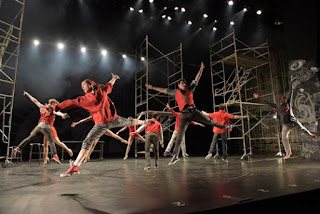 For this election week, a week where political conflict, passion, disappointment, and victory were all the talk, what better work to bring to the stage than West Side Story with its tragic conflicts? Based, of course, on Shakespeare’s Romeo and Juliet, the familiar story elaborates on the damage feuds inflict on the next generation.

It’s not likely that this collaboration between the Baldwin Wallace Department of Theatre and Dance and the BW Conservatory of Music’s Music Theatre Program was planned to evoke feelings stirred up by this year’s contentious presidential election, but it was hard to watch without thinking of it.

Director Victoria Bussert’s faithful presentation of the entire original production as directed and choreographed by Jerome Robbins, with music by Leonard Bernstein, lyrics by Stephen Sondheim, and book by Arthur Laurents, was often breathtaking. Watching both casts (the “Jets” cast on Nov. 9 and the “Sharks” cast on Nov. 10)  allowed a dramatic illustration of the unique vibe each cast generated.

Baldwin Wallace has enough young talent drawn from its top-rated music theatre program to cast the whole musical with age-appropriate gang members, a factor which added to the pathos inherent in this tragic tale of Romeo, Juliet, and their foolish families. Both Marias (Michelle Pauker and Nadina Hassan) and both Tonys (Jason Goldston and Colton Ryan) carried a little spark of sweetness that lit up the stage and made me weep (OK, I’m an easy crier) when things went horribly wrong.

And yes, Olivia Kaufmann and Shayla Brielle as Anita spiced things up as the “bad girls” who knew all about the world. Warren Franklin and Noah Mattocks as Bernardo (Anita’s boyfriend)  seemed matched in bravado for their two ladies, but only Franklin’s Bernardo graced the floor in the big dance in the gym scene. That second night the usually frantic Chino (Michael Canada) glided Brielle’s hot red-gowned Anita around the floor. Overall, the ensemble dancing, directed by Gregory Daniels, proved spectacular.

It’s hard to single out numbers in a show featuring hit after hit, but the delicious “I Feel Pretty” sung by Maria with the Sharks’ Girls (Joy Del Valle, Livvy Marcus, and Rose Upton) chiming in with exaggerated pouts and sarcastic musical quips, definitely offered a welcome dash of comic relief. 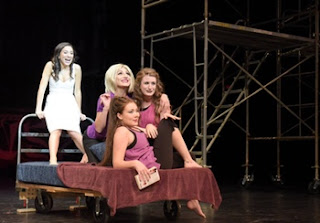 Scenic designer Jeff Herrmann’s simple staging (alternately a mural of New York City with Lady Liberty’s huge head stretched in the foreground, scaffolding, a bed, a blue sky) as well as costumes by Charlotte Yetman created a believable world with the merest of props. The full orchestra, conducted by music director David Pepin the nights I attended, switched with evident ease from romantic (“I Had a Love,” “One Hand, One Heart,” “Somewhere”) to edgy (“Jet Song,” “The Rumble,” etc.).

I opened by saying the casts were different. How? Well, while recognizing that each night a show runs generates a new vibe, on opening night the Jets seemed to fit the worried somber message of the story. The next night, in contrast, the (perhaps) better-rested Sharks blasted through the action with a snappy precision that brought out the violence edging the lives of both Upper West Side gangs. If  you are new to the story, check out https://en.wikipedia.org/wiki/West_Side_Story for the whole scoop. (Although in the past newspaper critics tended to summarize plots for readers, these  days it seems redundant to write what is so easy to look up.)

Bottom Line: A delightful production, a classic musical that never seems to grow old. It would be an ideal one for novice music theatre patrons (Maria even survives ...How could that happen?...it looks so weird to see her walk off...what were they thinking in Broadway land?) Oh well, who knows, who cares? A wonderful show can be forgiven plot quibbles.

Performances next week are Wednesday-Saturday November 16-19 at 7:30 pm. And Sunday, November 20 at 2 p.m. For tickets call the box office at 440-826-2240. The John Patrick Theatre, Kleist Center for Art & Drama [https://www.bw.edu/about/location/directions#kleist-center] is located on the Baldwin Wallace Campus.