There’s plenty of “Wait for it . . .  wait for it” guffaw-worthy comedy in the Great Lakes Theater production of Twelfth Night now playing at the Hanna Theatre. Directed  by Drew Barr, the play seemingly doesn’t miss a chance for obvious farce (and good for that!), but it also delights in romance and unexpected love.


Like all Shakespeare comedies, the plot is ridiculous. Fraternal twins, separated by shipwreck, wash up on an island, but neither knows the other is alive. Meanwhile on that island a Duke pines for a lady who does not pine for him.  The love-struck Duke’s now familiar words open the play and set the tone for this rom-com: “If music be the food of love, play on.”


And play they do--in more than a musical sense. Local laughs come immediately in the first act when twin Viola (the convincing and comely Cassandra Bissell) washes up on a strange island and is told she’s in Illyria. She remarks in surprise “And what should I do in Illyria?” Although even Shakespeare couldn’t have anticipated an extra joke, this reference tickled Elyria residents and the rest of us too.


Viola soon disguises herself as a man to qualify for a position working for Orsino, Duke of Illyria. The Duke (a dashing Juan Rivera Lebron) thinks he loves the wealthy countess Olivia (the scornful, flighty Christine Weber). Olivia, in turn, has eyes for Viola’s twin Sebastian, (Jonathan Christopher MacMillan).


Much of the real comedy (that is, farce) revolves around the interactions between members of Olivia’s circle: her blustering uncle Sir Toby Belch (the now-legendary Aled Davies), her clueless suitor Sir Andrew Aguecheek (Tom Ford), her officious steward Malvolio (Lynn Robert Berg), her jester Feste (M. A. Taylor), and clever servant Fabian (Laura Welsh Berg). All are funny, but Berg’s fearless portrayal of Malvolio’s cluelessness (it involves a drastic change of costume and a yellow corset) takes the comedic cake. They are supported by an engaging ensemble, many of whom may be observed in the background during the play reading books (beach reading for an island setting?)


An especially delightful touch was the music, which indeed did “play on,” thanks to a very tuneful Feste (Taylor), accompanied by a muse (Jillian Kates) floating on a platform above the stage with her electric guitar. Composer Daniel Kluger and Music Director Joel Mercier created a bit of magic there.


Bottom Line: While some of the comic elements might be trimmed (it’s a long play), it ended with a wonderful scene which I won’t spoil. We had to wait a long time for the last laugh (hence the “wait for it” above), but the final scene was so worth it. I think the moral must be that love, truly, is indeed blind. 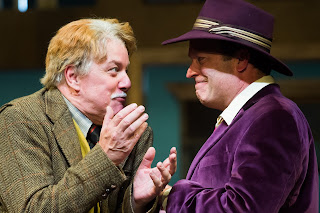